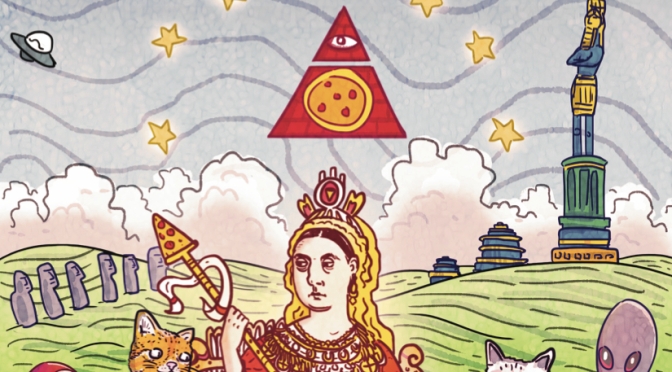 Some of us are lucky enough to have summers off. We rejoice in the allocation of a few weeks in which to catch up on all those things that we put off during the school year. Yet, inevitably, little of that to-do list is completed. Despite having some free time, the great conundrum of the summer is this: the more time you have, the lazier you are.

During my latest experience with the conundrum, lolling in my easy chair this past July, I began to think about why I didn’t feel like doing anything, including writing. I tried to coerce, reward, punish, guilt, and even trick myself into doing something productive. Each of these techniques succeeded, but only partially so and at different times. It was then I realized that laziness is not a one-dimensional concept. As an inherent part of life, laziness is very complex. What I had thought of as my “my” laziness was really several different types of laziness. And as I went through the cycle of counter-measures, I was subconsciously adapting to each type. I began to list a few types of laziness and I saw myself again and again, being lazy in many different ways. As the list grew, I saw on it not only myself but also the people around me. I realized we all exhibit aspects of all of these types of laziness at various times. Simply put, we lean towards different types, depending on the situation. In other words, just as we all learn in different ways, we are all lazy in different ways.

Borrowing a phrase from that Harvard professor, I now present the Theory of Multiple Laziness. Here are the basic ten Lazy types that my crack team of lazy layabouts and I, lolling away our summers, came up with. It’s just a start—I am sure that with more leisure time we could come up with others. Perhaps we could even pursue a government grant to lounge around listlessly and research lounging around listlessly . . . but I digress.

Consider the list—see if you can find your predominate type. Or perhaps you can add your own type to the list.

The Dragger. This is the classic lazy-type, what most people think of when they consider the word “lazy.” Draggers don’t want to get out of bed. They literally drag their feet. They’re late for class, dinner, dates, and yes, probably their own funerals. Lazy people try to avoid being thought of as this type, which is why they try to impersonate the other types on this list. When no one is looking, we all default to this type once in a while.

The Half-heart. Half-hearts actually get up and do things, but they take the shortest possible route in doing so, resulting in shoddy, half-hearted work—a result of going through the motions. These people just do the minimum to get by, often sticking to the letter of the instructions even if additional work, or depth, or anything extra at all, is required.

The Forgetter. Forgetters constantly forget to do things or even parts of things. They may even look busy and do a lot of errands and such, but the real important things just keep getting forgotten. These people have developed the ability to put work and anything else blithely out of their minds. This explains why so many young people have “senior moments”—they are in the habit of deliberately forgetting things!

The Substituter. Substituters understand the importance of looking busy, so they replace difficult activities with easier ones. The sad part of this is that Substituters actually look and feel like they are making progress, but they switch activities so often that nothing ever gets done.

The Re-prioritizer. This type is the one who quite efficiently breaks a task up into multiple steps, often backtracking to the beginning. The charm of such procedural thinking is lost, however, when the person focuses only on the steps of a project that can be accomplished with ease, deferring the hard stuff for someone else or some other time (which may never come). These are the people who need to clean their room before writing that essay or who need to go to the mall to buy gym shorts to inspire themselves to go to the gym.

The Bogger. This person is the opposite of the Re-prioritizer. Boggers plunge right in, but get bogged down in the details. They may actually accomplish things but they seem lost as to how these things relate to their overall goals. If they would take the time to plan, they might get something done. These are the people who never make enough copies of things or who have to go to Home Depot four separate times in one morning for the same project.

The Over-planner. This is the type who can’t get started until everything is perfectly set. This person spends so much time planning that there is little time left to do anything else. For them, the job is all about the plan. The problem is that nothing is ever perfect. Often, this person never gets started.

The Over-rewarder. Over-rewarders get things done using the old “work/play” strategy in which they reward themselves for getting things done. This is a valid strategy until the reward begins to interfere with the rate of accomplishment—or, in its extreme form, the reward becomes the main focus. Then, more time is spent on the reward that the work itself. This happens a lot with contractors.

The Bailer. This type starts off strong but usually quits halfway through—but always for a reason. These are the ones who don’t do something outside because it is cloudy (might rain!). They find reasons to leave for errands or other various activities that somehow contribute but get them out of the main work.

The Manipulator. This final type is the most metacognitive of them all—people who have put some thought into their own laziness. Being lazy becomes a game to them. They seek any reason they can to get out of work—but not because they don’t want to work, just because they want to not work. The odd thing about these people is that sometimes they work harder to scheme to get out of things than they would work if they’d actually get off their ass and did something once in a while.

As I mentioned, I myself am reflected a little in each of these ten types. Perhaps you see yourself up there, or perhaps you have developed your own, unique lazy type. But it’s clear that the process of considering what type of laziness one is exhibiting at the moment is a first, fundamental step in feigning off the summer conundrum, or just shaking off writer’s block. And it works—after all, I wrote this!

The Theory of Multiple Laziness originally appeared in The Annual #5

One thought on “The Theory of Multiple Laziness”