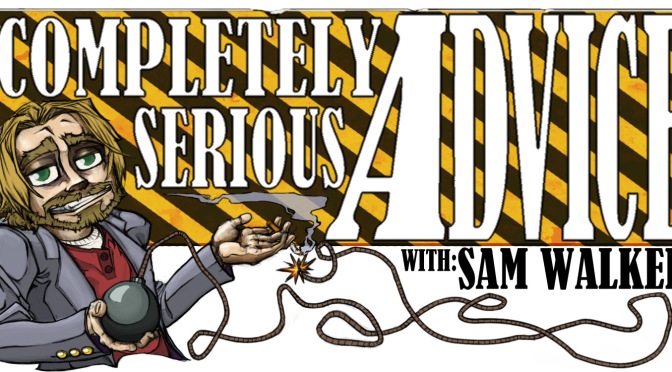 I am about to head off to college. I have always heard that it’s completely different from high school, and I don’t know what I should expect. What can I do to help myself, both academically and socially?
_____________________

College coming-of-age romps are a cornerstone of American cinema. If this genre has taught us anything, it is that starting out college not knowing what to do in college is basically the best way you can enter college. You have become a protagonist without even knowing it! Luckily for you, I have quite a bit of experience with these sorts of things, so let me throw out some scenarios to watch out for.
Maybe you see an amazingly attractive woman on the quad or whatever place you crazy kids use to avoid class these days. Try to introduce yourself to her. If this seems hard and is entirely out of character, you are in luck! Anyway, if when you are trying to talk to her a giant douche-machine appears out of nowhere, calls you something really uncreative, then puts his arm around her as they walk away, have yourself a little party, because you are going to end up with her. No Neanderthal ambush? No worries, the other way this can work is running into her at some sort of group function, and then he acts like a dick. Both are quite plausible.
If someone approaches you with an idea for something, do it. These days, all the college film focus is on offbeat ideas some obscure group hatch and become super rich. Not some kind of genius? Latch on to someone who is and ride some coattails!
Perhaps you find yourself interested in a frat, but don’t think you’re “cool” enough to get in.  Just make your own frat! It matters not if you are a nerd or some kind of social outcast, because there are a bunch more people like that surrounding you. This may seem daunting, and it may incur the wrath of those preexisting brotherhoods, but this is exactly what you want. If they come after you, who do you think the public will side with, a group of people just trying to have fun and avoid loner status, or a bunch of salty, entitled social terrorists?
So as you can see, you have a bright future ahead of you. Even if none of these things happen to work out, you could always get an office job and then be wrangled into some sort of odd made-up thing that ultimately allows you to have the college experience you have always wanted. No matter what, just don’t become a creepy stalker that makes hair dolls from their prey. Looking at you, Jason Schwartzman.
____________________

So I was out at a bar a week ago, and I ended up bringing a guy home with me. Admittedly, I had a pretty good time, so I gave him my number. I told him upfront I wasn’t interested in dating. The thing is, he won’t stop texting me, and he is getting far too attached—even texting me that he is having these weird dreams about me. Needless to say, I haven’t seen him again. I brought him to my place, though, so he knows where I live, and I have seen him around my place. It’s starting to freak me out, and I don’t know how to get him to stop.
_____________________

The old “I think I am in love with you and am having dreams about you” situation, eh? There is only one truly effective manner to deal with this, and that is to fight crazy with crazy. I particularly like this one a whole bunch, so I’ll throw a few base ideas your way.
If he is watching you, you can always give him a show. What comes to mind will require some errands. First, go to the store and pick up corn syrup, red, blue, and green dye, and some flour. Buy a whole bunch of red candles as well. Next, go to a local costume store (if there’s not one around, there are tons of sewing tutorials online), and buy some red robes with hoods (4-6 should do). Call in a few favors to get some people to your place so they can fill the robes. Last, and probably the hardest one to acquire, is a goat. I don’t know if there is a rental place for goats around you, but I have faith in you. You’ll get one. Oh, and a tranquilizer gun. That will be key.

Wait until nightfall, and invite your accomplices over. When you know he’s watching, start making it look like you and your buddies are having a casual get-together. Maybe throw on some music, get some drinks going, the usual bullshit. Once you have things feeling regular, walk over to the stereo and dramatically turn it off. Loudly proclaim, “It is time!” or something like that. Have your buddies don the robes and make a circle around a low table, which you will cover with the candles (it’s key to leave a large open space in the middle). Lead the goat in to the center of the circle to a nice layer of background chanting.

Obstruct view of the goat and pull out the good ole’ tranq. Now, PETA may get mad about this, but it’s just a tranq, everyone sleeps, cool your jets. Put the goat to sleep, and place it on the table. Pull out your handy bowl of fake blood (which you make with the ingredients I mentioned), hand it to a select friend, disrobe and kneel. It’s important that you are naked. If you feel weird about it, he has already seen you naked, so that’s stupid. Plus, showing your naked body to people in a circle really helps sell this as real to an onlooker. Have your chosen acolyte pour the blood over your head, arise and scream, “The ritual is complete!”
Presto! Stalker gone! At least he should be. I will admit, this strategy is a double-edged sword. If he is just crazy, he will run. If he is super crazy, however, you may now very well be his dream girl. Guess you’re just going to have to roll the dice on this one.
____________________
Question 3:

I am starting to date this girl and I want to take her out, and I’m looking for exciting, unique things to do. I’ve been going through the possibilities in my head over and over, but I keep coming up short. Any suggestions?
_____________________

Keeping things new and exciting is key to making sure your significant other doesn’t run off with some random Portuguese dude. I have a few ideas I have been storing for a rainy day:

Well, I hope this has helped some people out there. Have any issues or questions you need advice on?
E-mail them to CompletelySeriousWithSam@gmail.com

Support The Annual and purchase a subscription!

One thought on “Completely Serious Advice with Sam Walker #5”