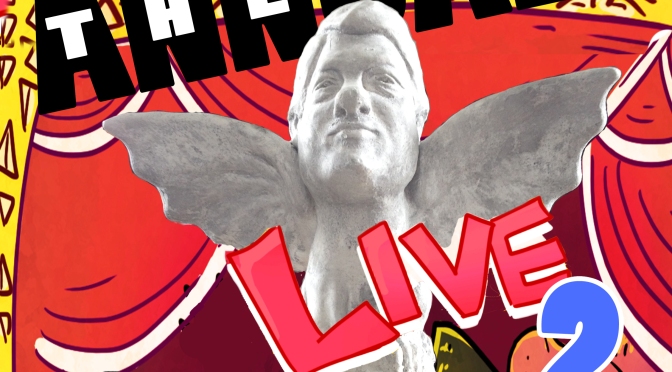 FREDERICK, MD (June 20, 2014) – Maryland Ensemble Theatre (MET) is proud to present the second installment of the comedy variety show, The Annual Live 2: The Sequeling.  Join The Annual Live cast as a they find themselves in the middle of a heated Twitter campaign to cancel their show following a sketch that is unfit for press releases. In an attempt to straighten out the show’s host (Kevin Cole) and the rest of the staff (Lisa Burl, Colleen Kelly, and Scott Travers) the network places a call to the convent to bring Karli Cole, the former co-host and current nun, to whip them into shape. Meanwhile, facing exile, Andrew Michaels, the show’s sad sack, is forced to find love, someone who will look past every awkward and unlovable thing about him and take care of him for life. It’s a comedic adventure that can safely be called The Larry Sanders Show meets Nunense meets Everybody Loves Raymond meets The Glass Menagerie,if none of those sound appealing then one might just want to stay in for the night.

MET Company Member Kevin Cole, who will be familiar to MET audiences from Laugh Station and Pickle My Monkey directs the Annual Live 2. It is written by Annual writers Kevin Cole, Andrew Michaels, and Scott Travers, and will feature cast members (Lisa Burl, Karli Cole, Kevin Cole, Caitlyn Joy, Colleen Kelly, Andrew Michaels, Scott Travers) playing fictional versions of themselves as they prepare to clean up their act and attempt to create an accessible show.

The Annual Live 2 originates from The Annual, a locally run, bimonthly humor magazine featuring much of the same talent. Their tenth issue is slated to be released in mid July.

Maryland Ensemble Theatre will present The Annual Live as part of its MET-X series. MET-X is MET’s programming, usually self-produced by Ensemble Members, outside of MET’s Mainstage season.  Performances are June 27 & 28 at 9:00 p.m. at Maryland Ensemble Theatre (31 W Patrick St. Frederick) located in the historic FSK Hotel.  Tickets are $11.50 (includes all ticketing fees) and may be purchased by phone at (301) 694-4744, online at marylandensemble.org, or in person at the MET box office.