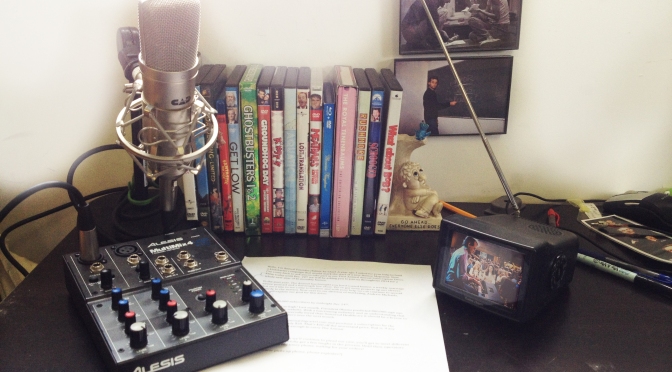 “Welcome back to MT175.3, the radio station with your favorite songs AND the home of the official NORAD Murray Tracker. Every hour we update you on the whereabouts of mysterious thespian and professional good guy Bill Murray. When we come back we’ll answer ‘Which family photo did Mr. Murray photobomb back in 2013?’ Here’s Louis Armstrong with What a Wonderful World.”

“Hello, listeners! Let’s answer that question, shall we? Which family photo did Bill Murray photobomb back in 2013? We have a few guesses coming in via Twitter. @BM4LYFE guesses, ‘The Jolie-Pitt family.’ @IWantMeSumMurray says, ‘The Baldwin brother’s publicity photo,’ and @billBmine says ‘My <3.’ Well, one doesn’t make sense, and all three of you are wrong. Bill Murray photobombed the British Royal Family at Prince George’s christening. Wow, Prince George! I want your life. Up next: Britney Spears’ You Drive Me Crazy.”

“I can’t help but hold my fingertips on my temples and wiggle my head when I hear that song. Okay, get the biggest Bill Murray fan you know in the room, because we’ve got some more information for you. According to Jonathan Pitt from New York City, Bill Murray just stopped to tie Mr. Pitt’s shoe and said, “Don’t trip.” What a riot. This lady is a little jelly of Mr. Pitt right now. This track goes out to you Jonathan—Gin Blossoms’ Hey Jealousy.”

“According to the official NORAD Murray Tracker on MT175.com, Bill Murray is heading towards the people of Indiana. If you’re good, he might just pay a visit. This song goes out to the Bill Murray fans in Indiana. It’s Dusty Springfield’s Wishin’ and Hopin’.”

“WHEEEEEERRREEE’SSS MURRAY?! Our Murray Tracker at MT175.3 says good ol’ Bill is currently pointing out a crack in the foundation of Mrs. Melon’s house in Indiana. He noticed the crack while riding down Hilltop Road on a tricycle. Now, Mr. Murray is telling Mrs. Melon she must leave her house because it’s about to collapse. Wow, would you look at that? The house did, in fact, collapse. Bill Murray got Mrs. Melon out just in time. What a guy, what a guy. And now, The Power of Love by Huey Lewis and The News.”

“Looks like Bill is in the White House playing hide and seek with Malia and Sasha. Girls, if you’re listening, he’s in the situation room, and he’s fallen asleep. Up next, a song that Pink sings.”

“The official NORAD Murray Tracker reports Bill Murray is steadily heading toward Russia, but will make a stop in Italy to give sex advice to ex-nuns. He’s truly amazing. Here’s another trivia question for all of our regulars: Which old WB show was loosely based on a story Bill Murray once told? You mull that over while I play I Feel The Earth Move by Carole King.”

“BREAKING NEWS: Bill Murray has diagnosed President Putin of Russia with cancer. UPDATE: Bill Murray has cured Putin’s cancer by making him laugh so hard his face froze in a smile. Putin has vowed to hug an American every day because of Mr. Murray’s heroic actions. Huzzah, Mr. Murray! For this momentous occasion I will play DJ MT’s mashup of the Russian and American National Anthems.

“Wow, I cried during that entire song, especially when the beat dropped. Now, back to the question I previously posed: Which WB show was loosely based on a story Bill Murray once told? The answer? Gilmore Girls.”