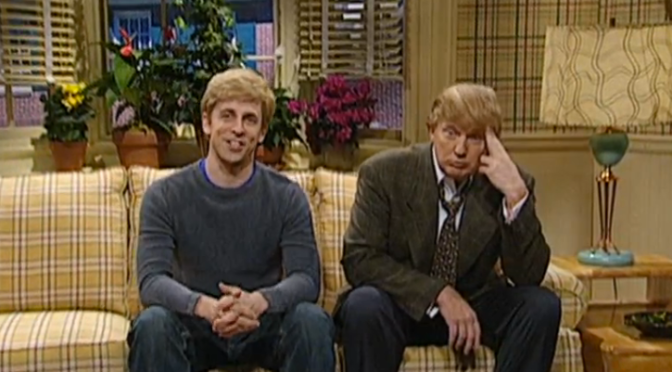 On November 7th, America’s funniest humorless man will host Saturday Night Live for the second time. “I’m doing NBC a big favor, they probably haven’t seen ratings like I’m sure to bring since the last season of The Apprentice. I’m a very important man, and Lorne’s made a smart move in asking me to host before I run out of presidential steam.” Tweeted the humorless man on Tuesday after the news broke.

Earlier this year the humorless man announced a run for the presidency which has provided much fodder for the comedy show. Cast member Taran Killam is currently performing as the humorless man, while SNL’s current announcer Darrell Hammond has played the role in the past. Perhaps November 7th will be the night all three humorless men take the stage only to be confronted by the real Three Amigos.

Largely supported by white nationalists, the humorless man is looking forward to spending time with a group of people slightly more diverse than the crowds that attend his rallies. “They’ve got the new black Ghostbuster and Shasheer – I’m not even going to try to pronouncer her last name. I hear they even have a Mexican writing for them now, which is great but if he doesn’t have the documentation I won’t read his skits. Plain and simple.”

Of course, the humorless man has one goal for the week, to make SNL great again. “They haven’t been funny since Chevy Chase left, I’m sorry but it’s true. I hosted once, I tried to go with the flow but it was just no good, and it’s my understanding that you don’t have to work too hard to make me funny.” Fortunately for the show’s cast and crew, the humorless man has a plan “First of all, no more of these all-nighters. I’ve paid someone to write a book for me before and all the best chapters came out between the hours of 9-5. Sure, they’ll be hesitant to change after running a show the same way for 40 years, but once they hear my plan I bet they’ll change their minds. A lot of the writers came from this You See Me theater or whereever. They don’t even write at the You See Me! It’s all improv. Once those guys are weeded it out you’ll see strictly Lampoon writers at the helm. Strictly Lampoon.”

You can see the humorless man host Saturday Night Live on November 7th at 11:30pm EST.