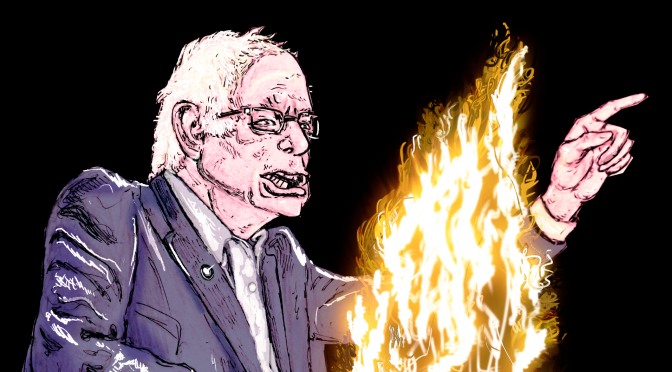 On this episode of Bernie’s Campfire, Senator Sanders discusses the recent GOP Debate and why he didn’t use the #DebateWithBernie hashtag. He also lays out a plan for supporters to rally for more media attention.

Please send any questions you have for Senator Sanders to BerniesCampfire@gmail.com or tweet @SandersCampfire.

My good friends, pull up a log, I’d like to speak with you for a few minutes about this week’s republican debate. Some of you may have noticed that I did not tweet as fervently using the the Debate with Bernie hashtag this time around. Over the course of nearly 48 debates the GOP has failed to narrow down their candidates to single digit numbers, and have done a despicable job coming close to issues that affect real americans today.

At this point the Republican debate has become a broken cosby record. You may get a laugh out of it every now and then but deep down you know it’s wrong to enjoy it. You start to feel sick, your stomach knots, you begin to feel angry, you realize what that spanish flea bit was really about. Ultimately, you might feel better if you turn it off entirely and go for a walk.

It’s hard to believe Lockheed Martin wasn’t a key sponsor in this debate when you consider how many candidates took the stage to advocate for the start of the third world war. Of course I don’t recieve large corporate donations but any candidate on that stage certainly recieved a hefty amount from the war machine with the possible exception of Rand Paul who is likely gaining support from introverts for his isolationist methods.

Much of the night was spent discussing who and how often bombings would occur during any respective candidates presidency. From carpet bombings to the complete destruction of home furnishings, these candidates are willing to lay innocent lives on the line often intentionally in order to maintain global dominance, something which by the way we have no shortage of here in America.

At one point Donald Trump said that it would be acceptable to kill the family of terrorists because the terrorists want to kill us. By using his own logic, I guess that makes it acceptable for a terrorist’s innocent mother to come after Donald Trump because he wants to kill her.
Speaking of Mr. Trump, this one candidate, a billionaire who holds an unfortunate percentage of America’s wealth, currently holds 99% of the media’s attention. Meanwhile I can only hold their attention for less than one percent of national coverage, and by the way, I’ve had a very big week. I spoke to Killer Mike. My campaign has recieved over 2 Million contributions. I’ve been endorsed by The Communications Workers of America union and the Democracy for America PAC – All information you would only learn if you had your phone set up to notify you whenever I do something newsworthy. Televised media is ignoring this campaign and instead running call-in Christmas Giveaways. I am encouraging my supporters to call into your local news stations in an attempt to get through as the 4th or 5th caller and demand more coverage of Sanders Revolution. Let them feel the bern!