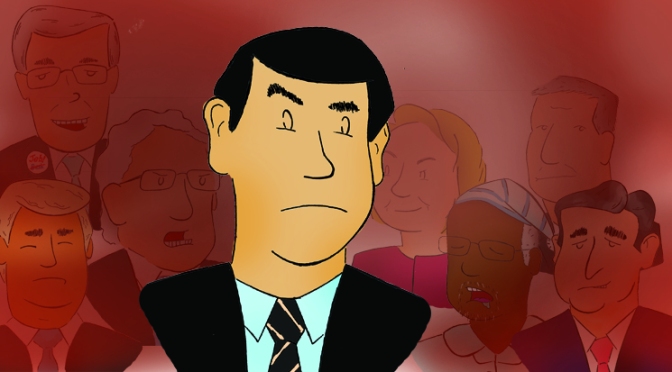 “We should have seen this coming.” The final words of Marco Rubio 2016 echoed down the halls of the electoral hospital where Rubio lay in his final hours next to John Kasich 2016. Many wondered what he meant by we, certainly any electoral official or persons making a passing glance at the news could have seen that Little Marco’s best days were behind him.

In his final weeks among the American public, it was clear that dementia had begun to set in. Taken to imitating those around him, Rubio 2016 thrashed about on-stage taking cheap shots at Donald Trump 2016. With reckless abandon he spurted off jokes that one can only hope he had written himself – or at the very least bought off an aging comic from the Catskills. Whatever it was, it had become apparent that if Marco were to survive the season, then Barack Obama 2008 would be the last president to have a half-way decent grasp on comedy.

Here at The Annual we didn’t have much to say about Marco Rubio 2016. We saw this coming. However, when making illustrations of each candidate, Editor-in-Chief Kevin Cole remarked that he’d likely vote for the candidate that was easiest to draw and that “Rubio was one simple looking motherfucker.”

Marco Rubio 2016 had the name of a campaign that ought to lighten up on immigration and a long history of representing his constituents as well as Trump (a campaign with no constituents). The fact that he is even allowed to hold public office with such a piss-poor voting record is evidence of how special America truly is. In his passing we wish him a peaceful rest so that he may fail to attend as many senate hearings as he did prior to taking on the 2016 title.