In December of last year I visited Chicago for the first time.  I got a taste of greasy-delicious food, street music, magnificent architecture, and passionate protests against a corrupt mayor and local government. This was my kind of town. After a long day, Taylor Goebel and I got to sit down and chat with a fine mind, the gifted comedian and musician…

David Luna: Were you raised religious at all?

Taylor Goebel: You still into that?

GG: No, I never liked church, really. It always seemed like work, you know? I don’t think I ever really bought into it.

DL: And then she never answered?

GG: Well, obviously because there is no answer.

I got confirmed, and she was like, “Gabe’s great, because he asks questions whenever.” And I was like, “No, I’m not right for this, very clearly.”

DL: When did you make the decision to really pursue comedy?

GG: I don’t really have a firm place and time. I wanted to be a film director, and I went to [University of North Carolina School of the Arts]. I don’t have the patience for that, or the mindset. Then my friend was like, “Hey, I did this comedy program up in Chicago, you should come do it.” I always loved comedy, but it didn’t seem like a viable career path, because it’s just like, what is a comedian, you know? What is that? And then I came up here and I did the program and it was so much fun, and I just never left. I guess now it feels like it’s what I’m doing, but there wasn’t a point where I was like, “I’m gonna be a comedian now”. It was just like, “This is what I’m doing. Maybe I’ll direct, maybe I’ll go back to that. Maybe I’ll focus on music.” I love taking myself seriously when it comes to music, because that’s super fun.

DL: What are your musical influences?

GG: Musically, I love funk and soul. Specifically, Stevie Wonder, and anyone who’s inspired by Stevie Wonder, which is pretty much everybody. He was just amazing, he is amazing. So, R&B, Stevie Wonder, D’Angelo, Vince Guaraldi’s Charlie Brown Christmas album, one of my favorite albums. As a kid I loved John Williams.

GG: Tim and Eric. Steve Martin is huge. Those are my two big ones. Those are the people who I can watch their stuff over and over and over. Conan, when he was on Comedy Central when I was in middle school, that’s what I watched all the time. As far as Youtube goes, I love Good Neighbor, Kyle Mooney. When he got on SNL I was so excited.

DL: Is there anybody you wish you could eventually work with?

GG: Tim & Eric’s company, for sure. I don’t know if I’m right for it, but as far as the programming they’re putting out. They’re doing Nathan For You, which is the reason I was late today, I was watching that show. They put out Review, they just put out that new With Bob and David. They’re putting out the funniest stuff. Their stuff is hilarious, and then they come and they produce for other people. They’re equally as talented at producing as they are at making their own comedy, if not more so,  I think Nathan For You is incredible.

DL: What do you want to do?

GG: I want to be able to have an outlet to make comedy on a larger scale. I’d love to be writing right now, so whether it’s late-night television, doing sketch, a show, or a film, I want to make a project that is a really funny, bigger project. I’m doing a lot of sketch. Vine is six seconds, there’s so much comedy on there. It’s so ripe for comedy, because it’s six seconds.

DL: That’s most of what you see that becomes popular on vine.

GG: Right. Sometimes music, mostly it’s comedy. The way that it loops is a lot like a “black-out”, from Second City. Since they do a lot of sketches, three to ten minute scenes, they like to have these things to break them up that are like short jokes. Maybe they’re three lines, or maybe five lines of a situation, and then it blacks out, a hard black-out on a line. It’s like a one-liner, almost, but in the context of sketch. That’s kind of what Vine is.

DL: Do you feel you’re doing something that’s going to push comedy forward?

GG: I mean, that sounds amazing, I don’t know if I will do that. I have things that I would like to do. I’d like to make a really good musical. The South Park guys did it with Book of Mormon. It performed so well, and it was really alternative to what was happening on Broadway. Everything on Broadway, they might be quality shows, but they’re all remakes, or they’re based off of a movie or something, rehashing these old ideas. 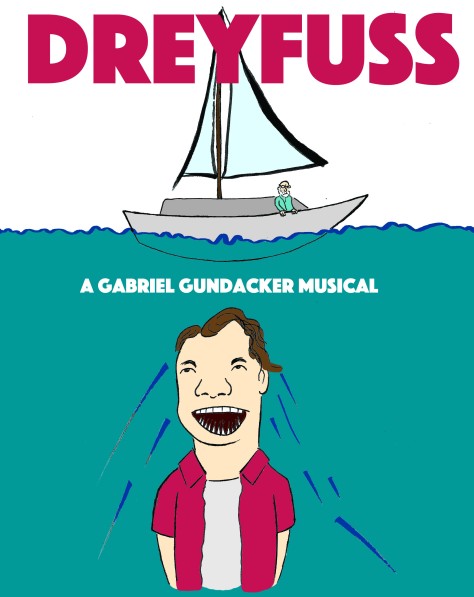 But writing a musical is so much work, I think people underestimate how much work goes into writing a musical. You write a whole story and there’s somebody writing the music for it, and they have to pair. I don’t know if I can do that, but that’s something that excites me.

DL: How do you feel about death?

DL: Did you stop thinking about it? Did you have anxiety?

TG: The way of dying.

DL: What are your biggest fears?

GG: Planes pass the plain of fear for me, no pun intended. I’m not afraid to be on a plane, I’ve made peace with dying when I go on a plane. I’m ready to go. That’s real fear. Like when someone’s going to shoot you and you’re just like, “Okay, it’s okay”. You know what I mean? Or when a tornado is coming at you and you’re like, “You know what, I’m here with my family.” That’s how I feel when I’m just on South West, it’s ridiculous. Every time I fly I have a playlist that I’m comfortable dying to. I listen to my own music, music I’ve written, so I’m like, “This is what I’ve accomplished. This is my life.” I’m just flying two hours.

DL: You have one week left to live. What do you do with your final days?

DL: No matter what you do in the week you’ll be fine.

GG: Okay, cool, cool, cool. So I’d probably stay up late, and see all the music I want to see, or movies I haven’t seen, go some places, and then be really sad in spurts.

Gabriel continues to work on projects between Chicago and Orlando and is always releasing new content and videos. He currently has nearly 500K  followers on Vine and contributes keys and vocals for the R&B Funk band Fat Night. You can also follow Gabe on Twitter @GabrielDreyfuss.