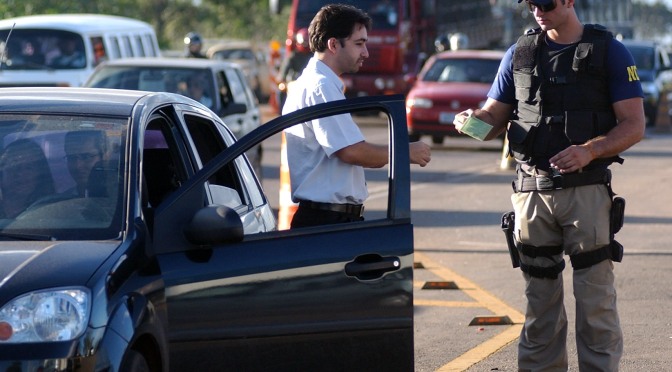 (URBANA, MD) – Danny Langham was late for work. After packing lunches for his kids, spilling his coffee on his shirt, and turning off “the goddamn bathroom light.” Danny finally made it to his car and began his 45 minute commute down 270. Unfortunately for Mr. Langham, he received a text from his Boss saying a “very-important” meeting was starting 15 minutes earlier than scheduled, so he’d “better get his butt down here.” Danny, normally a mild-mannered, law-abiding citizen, was stressed into pushing the gas pedal down slightly further than he was used to, rather risking the speed limit than to risk losing his job. Again, unfortunately, just as that speedometer passed the legal limit, Danny whizzed past the hidden police cruiser of Maryland State Trooper Geoffrey Lake.

As the blue and red lights flashed behind him, Danny cursed to himself. His mind raced as he thought of any excuse he could give the office in order to get off without a ticket, but his brain was already over-vexed from his hectic morning and pending meetings. Plus, Trooper Lake had his own agenda.

“He came up to the window, did the normal ‘Do you know how fast you were going?’ routine, and I thought to myself, there’s no way to get out of this, and no way to speed this process up. But I’m glad I was wrong.”

After running Mr. Langham’s plates and license number (both came up completely clean), Trooper Lake took it upon himself to give Danny a chance of catching a break.

“He came back to the car, handed me my license and registration, then asked me the strangest question…he asked me what song I was listening to when I got pulled over.”

Trooper Lake had spied Danny’s iPhone plugged into the auxiliary jack of his Lincoln Continental, and decided to leave Mr. Langham’s outcome up to fate.

“I wracked my brain trying to remember what had happened just 10 minutes ago,” explained Mr. Langham. “And then it came to me – Creedence Clearwater Revival!”

Trooper Lake asked Danny to turn the car back on to hear which song, and as soon as the engine fired up, so did Proud Mary.

“Office Lake just smiled and said, ‘Damn, I do love me some CCR.’ Then he smiled, gave me my ‘ticket’ which turned out to just be a warning citation, then he gave me his card. ‘Have your boss give me a call if you end up too late for your meeting,’ he said, then he walked away.”

Luckily, Danny made it to his meeting without too much harassment from his boss, but he kept onto that card. Later that evening, he posted his experience to Facebook.

It turns out Mr. Langham isn’t the only one in the area to have run into “The Loveable Trooper Lake.”

“I received over 100 ‘Likes’ and comments to my post, from other locals who’ve had the pleasure of being pulled over by Mr. Lake. It was astounding!”

The Annual took it upon ourselves to investigate some of the other claims.

Christina Lopez was coming back from a concert in D.C. with two friends when she heard the police siren behind her.

“I had never been pulled over before…I was so nervous! I was on the verge of tears.”

Ms. Lopez said Trooper Lake came to the car, had a look inside, and asked some fairly standard questions.

“He asked where we had been that night, where we were going, and if we had been drinking or anything. He took my license and registration back his car, and after a couple of minutes came back to me. Then he said something I never expected…”

Mr. Lake asked if Christina would mind calling her mother for him.

“I asked him why, turns out he just wanted to have some fun with us.”

Although wary, Christina agreed. After connecting with her mother, Trooper Lake asked if he could speak with Mrs. Maria Lopez.

“I didn’t know what to do, so of course I handed him the phone.”

Trooper Lake went on to have a lovely conversation with Maria. He asked if Christina was doing well in school, did her homework, and always made sure to check in with Mr. and Mrs. Lopez when she was out of the house.

“He was laughing and I could hear my mom laughing on the other end, like they were best friends!” He gave Christina a warning citation, and told her to be careful driving home. Then he turned, got back in his car, and drove away.

“It was surreal,” Christina says. “Like, no one expects something like that to happen. There are cops out there that truly care about people, that care about being peace-keepers rather than just rule-enforcers. Was I speeding? Yes, I won’t deny it. Was it excessive? I don’t think so, and neither did Trooper Lake. And I will definitely keep my grades up just in case this happens again!”

But the strangest tale of all belongs to Logan Spies, another local resident heading up 270 to another matter of importance, again disobeying the posted speed signs. In addition to speeding, Logan failed to come to a complete stop at a stop-sign off the highway, all whilst talking on his cell phone. Trooper Lake had been following Mr. Spies the entire time, and pulled Logan over after confirming the third offense.

“It was stupid, it was really stupid, and normally I’m much more careful and strict when it comes to the rules of the road. But I was trying to get directions from my friend, and I was running late. Luckily Officer Lake realized I did not put anyone else in danger, but he still had to stop me.”

Officer Lake came up to Logan’s window, and gave him the list of charges. Mr. Spies was very apologetic, admitting to his mistakes and explaining his reasons for breaking the law. After again running the license and insurance info, Officer Lake offered Logan an alternative to getting three separate tickets.

“’Do you like…riddles?’ he asked me. I honestly had no clue how to respond. I said ‘what?’ and he said again, ‘Do you like riddles?’ So I said ‘I guess so,” and then he gave me the choice.”

Trooper Lake told Logan that he could either 1) pay the fines, 2) go to court and contest the fines (with Trooper Lake there to give his side of the story), or 3) he could try his luck by answering three riddles. Each riddle correctly answered would turn one offense ticket into a warning. But, each wrong answer would result in the maximum fine allowed per offense (up to $1,100).

“My first thought was, am I really about to have some Hobbit-esque riddle battle with a police officer? How did I get here? My next thought was no way did I have the money to pay for ANY of these fines, let alone if I got all the riddles wrong, so what did I have to lose? So, I accepted the challenge, then mentally prepared for the game to commence.”

As I was going to St. Ives,

I met a man with seven wives.

Each wife had seven sacks,

Each sack had seven cats.

Each cat had seven kittens;

How many were there going to St. Ives?

“Luckily, I had heard this one before,” explains Logan. “Being a huge fan of the Die Hard films growing up, I was well versed with the riddles used in Die Hard with a Vengeance. The answer came quick, which was good for me.”

The answer of course, [SPOILER ALERT], is one. The narrator of the story is the only one going to St. Ives; the other group is coming back. Then Trooper Lake posed this riddle:

“What has no beginning, no end, and no middle?”

“Now, I was stumped,” say Mr. Spies. “My first thoughts were something abstract, like time, but then I assumed time has to have a beginning, it just didn’t fit the riddle well. I was thinking so hard, when Officer Lake offered me another clue. He said “the answer is all around you…” I look around my car, and the answer jumped right out at me!”

Logan’s car was absolutely and disgustingly filled with fast food wrappers. It would appear that Mr. Spies had stopped for something every morning, noon, and night in the past ten years, and left the garbage in his car. And the most predominant locale?

[SPOILER ALERT] “Dunkin’ Donuts! The answer was a doughnut. I thought that one was really clever. I never would have got it without my revolting habit of not throwing trash away.”

That left only one more riddle to solve, and Officer Lake wasn’t going easy this time:

“Of course I was ready for this. He only had to say it two more times in order for me to get all the pieces. I pulled out an old receipt and a pen, and got to work. At first it seems like there is still not enough information to solve it, until you look at the supposedly ‘useless information’ from the riddle. First – how am I supposed to know how many windows are on the building in question in the riddle? That’s the thing – you aren’t. Not until the person in the riddle asks for more information. Once I pieced that together, it was easy enough.”

The answer to their ages, of course, is [SPOILER ALERT] six, six, and one. After figuring out the riddle, Officer Lake pretended to be melting like the Wicked Witch of the West, and cursed those “nasty hobbitses” all the way back to his patrol car, and drove away into the night.

“I was so grateful not to have to pay those fines, and he actually made me use my brain. Its little things like that that make me proud to be living in a place a great as Frederick,” said Mr. Spies.

When The Annual requested a comment from the Maryland State Police office, we were told that there is no “Officer Lake” currently employed on their records. Is Trooper Lake just a figment of our imagination? Or is this perhaps just another riddle?

Find out next time on “Ripley’s Believe it or Not!”