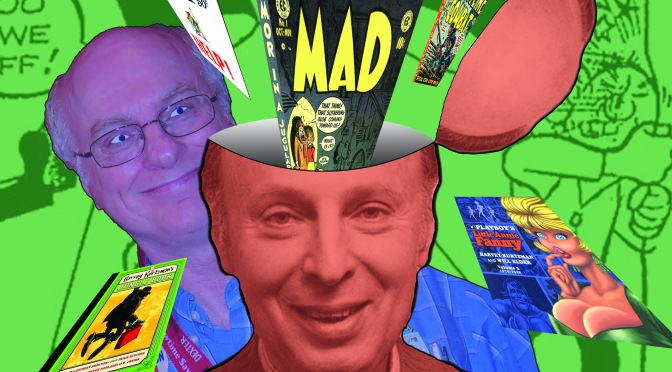 In 2015 Bill Schelly completed HARVEY KURTZMAN: The Man Who Created MAD And Revolutionized Humor In America a book which he spent four years writing. Harvey Kurtzman may not be a household name, but his creations certainly are, and Schelly outlines their importance as such:

[MAD created] satire of popular culture figures, political figures, products, the consumerism that was rampant after [WWII]. Everybody had to have their new toasters or cars with fins or whatever. Satires of consumerism is one of the major things that MAD did, of course this was picked up by Saturday Night Live and The Simpsons and everything else. Harvey Kurtzman’s influence in humor is incredibly important… Think about it like this, here you are, some kid in a little town in the south. Yet, a magazine that’s really subversive can reach you at your little corner store, and every kid can get this for ten cents. It slipped completely under the radar and was available for purchase to a million people, every issue. It’s quite an interesting way of getting underneath the repressive forces of society.

We recently spoke to Bill Schelly about the journey of chronicling Harvey Kurtzman’s life and massive catalogue of work. 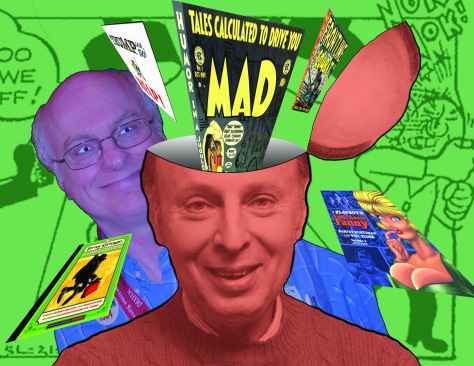 What in your personal life brought to you Harvey Kurtzman prior to writing the biography?

I’m a baby boomer that grew up in 60s, so I’m an old guy that was exposed to MAD coming after Harvey Kurtzman had left. But in the early 60s they were reprinting a lot of his issues in the MAD paperbacks. A lot of those paperbacks were brought home by my brother and then by me, so I was reading comics created by Kurtzman and his collaborators when I was a kid. As I got older, I started reading Little Annie Fanny in Playboy; when you’re going through puberty it’s particularly… interesting. As I got older, and seriously interested in comics, I started reading some of his actual issues of MAD that I got my hands on, and his more serious work in war comics.

As you note in the book, they took Harvey Kurtzman’s name out of the reprints in the paperbacks. Did you seek out his work specifically, or did you notice a theme in what you enjoyed through life and in his work?

I got involved in the early stages of Comics fandom in the 60s and people were researching who did the old comics; many of them weren’t signed. I found out that Kurtzman had done those MAD paperbacks that I so enjoyed. I started connecting the dots between that and Little Annie Fanny and his other works. Suddenly, I realized this guy had done tremendous work that I really loved and was superior to others around him, so I realized this was a pretty remarkable person and started seeking out more of his work.

In your preface to the book you mention taking a “back to square one approach” given all the material written about Kurtzman but scattered across countless sources. Between compiling that material and doing fresh interviews, what was square one for you?

Square one was, first of all, finding out who he was as a person. Interviewing his family, relatives and friends because so much of the material that had been written was about his work itself, which is important, but if you’re going to write a biography, you’re writing someone’s life story which is about who they are. I needed to delve into that area.

You also note that the book took four years to write, did you come across any roadblocks or obstacles along the way? 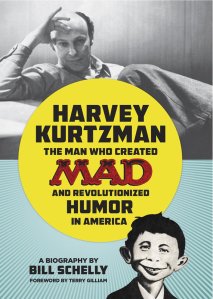 The main obstacle is that it was such a big story with so many people involved. It almost ended up being more than I could handle in terms of all the information, coordinating all the material, the data. In over four years I’d forget something I learned in year one, in year three I’d have to go back and relearn things from year one. The hardest part for me was keeping track of all this material.

As far as writing the book, I had great support from my publisher Fantagraphics Books. I had complete confidence knowing the book would be published and put together very well. I never had any doubts about it being published, which is a great feeling.

You mentioned how it had surpassed your expectations in terms of how large and how much work the book would be. Was there a key moment when you realized it would be more work than expected?

I don’t think so. It was a gradual realization as the work accumulated and as time passed. It’s like a puzzle with ten-thousand little pieces. It’s not just about having all those pieces, it’s putting them together in a meaningful pattern that makes sense; that is such a big challenge. But I didn’t have one moment of panic or anything like that.

When you sat down to write the book was there a particular aspect of Kurtzman’s life that you were most excited to write about?

As a long time comics fan, a lot of what interested me was how he got started in the business. Discovering some of the early comics he did as a teenager, and the comics work he did in WWII in the army, and how he got started at what is now Marvel Comics but what was then called Timely Comics, working for Stan Lee. Those years were years that I knew nothing about so they were particularly interesting for me to learn about, and it was great to be able to interview Stan Lee about working with Harvey and to actually talk to the people who knew him at that time.

In addition to Stan Lee you talked to the likes of Hugh Hefner, R. Crumb, and Kurtzman’s own family, was there anyone you were particularly excited to interview?

I haven’t really hob-knobbed with big celebrities before, so talking to Hefner really had my heart pounding. He was only willing to give me 45 minutes, so I knew I had to cover the ground in a certain amount of time. I’d never met the man before, it was a telephone interview, but I was very nervous about that. A lot of the others, they’re big names in comics but they’re not celebrities per say. 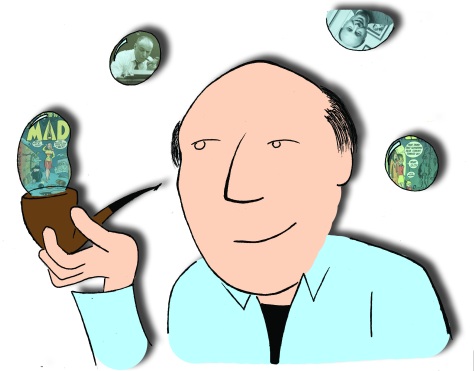 Hefner plays a key role throughout the book and in Harvey Kurtzman’s life. Did you have a strategy for tackling the huge span of time in which their lives were entwined in only 45 minutes.

There were certain key questions that I needed to ask him, and I wanted his exact input on. Whether Hefner had offered Harvey, specifically, his own magazine with Hefner and Playboy before or after he had left MAD. Things like that, which had never really been pinned down. What was his real opinion of the magazine they did together called TRUMP, and why did he think it failed. Also, the creation of Little Annie Fanny, which he suggested was a co-creation so I wanted to pin him down on that. Those were the key areas.

Going through everyone you interviewed, who did you learn the most from?

It depends on the part of his life. I interviewed his nephew Adam Kurtzman, Harvey’s direct family, his wife and his daughters didn’t know much about Harvey’s mother. Adam, however, did because, when Adam was growing up, Harvey’s mother lived with them. Adam’s father was Harvey’s brother, so in her later years, Adam got to talk with Harvey’s mother a lot and get to know her. So I was able to get a lot of perspective on [Harvey’s] early life and his relationship with her, from [Adam] and only [Adam].

Other than Harvey Kurtzman, who would you have loved the opportunity to interview?

Bill Gaines, the guy who published MAD Magazine and EC Comics. Although I had a great interview that had been done with him by my publisher Gary Groth, obviously I would have loved to have my own conversation with him. Once I started really honing in on the information, I could see the areas where you could surgically go in and ask a question about something, give him the information he needed to remember the circumstances, and maybe get the best answer that could have been given, but unfortunately he was gone.

One of my takeaways from the book was the way Kurtzman would often sit down to do other humor projects post-MAD. He’d have great teams and a quality product but they never panned out like MAD had, and still he kept working. By the time you finished the book and spent four years putting it together, what was your biggest take away?

I think part of it is, as magical and wonderful as MAD was, part of its success was the timing. It came out at a time of great societal repression, the McCarthy era, the entertainment available to young people at the time. One of the things I came away from it with is that timing is so important. You have to have the right product available at the right time. Later, he did other things that were very good and there were various reasons why they didn’t succeed, but obviously if the time had been right, they might have done a lot better.

I have two obligatory biographer questions for you. The first, who would be your dream biography subject?

Whoa. Well, I write mostly about comics and creators in popular culture… probably Robert Crumb. He’s such an important figure, his work is so incredible, he’s done so much and there’s so much controversy. It’s a very rich subject. 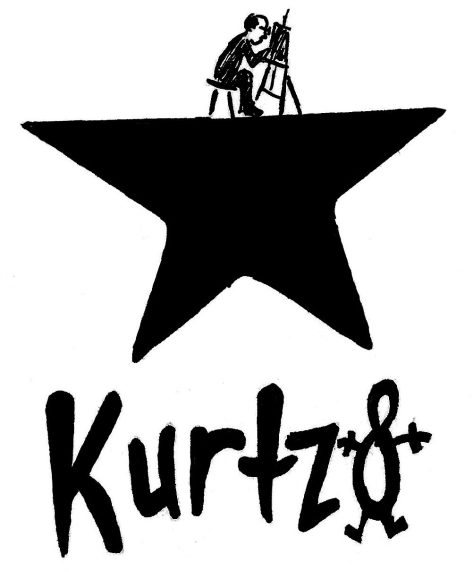 Given the recent success of Hamilton, do you think we’ll ever see a Kurtzman musical?

There’s been a lot of talk about movies, a Bill Gaines movie about EC Comics. There’s been various documentaries that people have wanted to make about Harvey Kurtzman and HELP! Magazine which he created, but they never seem to come to fruition. As far as a musical goes, I think that would be a great idea. I think there could be a tremendous story there. After all, many people feel like MAD was one of the first and most important forces that led to the counter-culture. Its effect on society was like a tidal wave. It’s a big subject that can reach and touch people in many different ways. You kinda laughed when you mentioned Hamilton, but I could see it. I don’t know if you’d call it MAD! Or HARVEY! Or what, but I’m all for it.

HARVEY KURTZMAN: The Man Who Created MAD And Revolutionized Humor In America is available wherever books are sold.  You can learn more about Bill Schelly by visiting his website BillSchelly.Net

Interview and Artwork by Kevin Cole