(FREDERICK, MD) – The recently opened Astrological Hospital in Frederick, Maryland, has been overrun with all types of ailments since they began taking in patients this past Sunday. While the majority of sick individuals are dealing with cancer-related issues, the hospital would also like to note some of the more unusual cases they are seeing.

Records show an alarming number of back-injuries as patients born around early November are going “full-scorpio.” Here are some pictures of the injuries:

The way the spine bends causes the human form to look similar to that of a scorpion, hence the term. 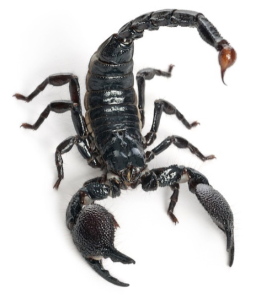 “I just thank God that Dirty Harry took out that serial-killer ‘Scorpio’ before we opened!” says Bryan Watson – a surgeon at the hospital – as he hurried by. A sentiment that this writer believes we can all be thankful for.

In addition to the back injuries, there have been an unusually high number of scorpion stings and pinches.

“Plus it is crab season, and we do love our crabs and Old Bay here in Frederick!” exclaims Jamie Yolithe, who was passing the time in a waiting room, while her husband (whose birthday is July 8th) was in surgery.

“He was just so excited to be boiling his own crabs again, that he tempted fate and tried to grab them free hand from the bushel. The stars were NOT aligned in his favor, they’re trying to sew the finger back on now.”

Other unfortunate members of the waiting room included Nathan Remington, born November 25th, who was shot in the shoulder with an arrow by his horse, Chiron.

“I had gotten him out of the stable, and wanted to test my archery skills while mounted, like on Game of Thrones, so I led Chiron out and he immediately went for my bow. I’m not exactly sure how he was able to notch an arrow and fire, but, well, here we are.”

Next to Nathan sat Brenda Bosh, born October 11th, who slipped on her scale trying to weigh herself after getting out of the shower.

“It’s actually quite ‘Libra-rating,’ haha, to get out of the house for something other than going to work! Although, a broken leg isn’t the most pleasant…buy hey anything is better than retail right?!”

This writer was not amused by her attempt at humor.

Last, there were the conjoined twins Mary and Leslie Clank, born May 28th, who got into an argument while bedazzling their new jean-jacket with faux jewels. Mary said rubies were more “in,” while Leslie claimed sapphires were “hip.” Since they could not come to a compromise, they proceeded to jam the gems into each other’s eyes.

“Although painful, it’s quite funny, actually,” says Mary. “We think so much alike!”

“Yeah!” chimes in Leslie. “Like, not only did we have the same idea of attack, but we both thought going for the eyes first was the best idea! That’s why I love my sister so much!”

As I got up to leave the hospital, a Dodge Ram crashed into a Ford Taurus right outside the emergency room doors. The Ram had a lion in the truck, which escaped, mauling four as it bounded away, and the Taurus was transporting Beta-fish to the local PetSmart. All the aquarium tanks were shattered, leaving water and fish all over the entryway.

“But that’s what we signed up for,” says Chloe Donahue, the owner/operator/resident palm reader for the clinic. “If I can see it in the stars, then this hospital is prepared to fix it.”

Chloe also warns Tindr users of any matches they receive born between August 22nd and September 22nd, as they might not be as “modest” as they claim in their profile.