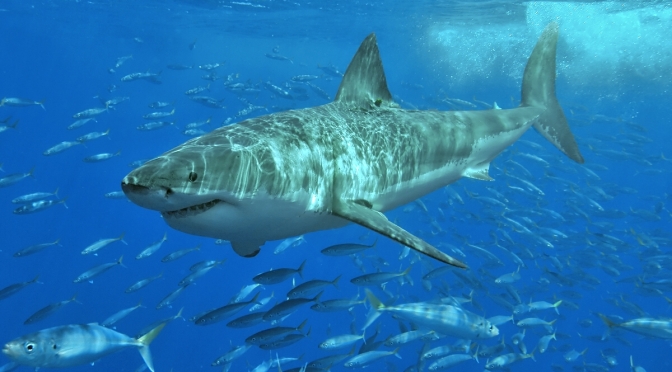 (OCEAN CITY, MD) – As the kids all go back to school and summer comes to a close, there is one annual tradition that sharks have grown accustomed to – human week.

“Oh, I LIVE for Human Week,” says Cruiser, an Oceanic White-Tip who stopped in from the deep ocean for the festivities. “I look forward to it every year, it’s become a tradition for me and my family.”

When vacation season ends, there are those few who just love to get the final drop out of their summer, and hit the beaches in droves as the temperatures begin to fall. The increased activity and decrease in daylight makes a perfect combination for these apex predators.

“It’s basically an all-you-can-eat Human Buffet!” yells Puncture, an Atlantic Mako, as he chews on a tibia. “Normally, I eat trash and whatever slow fish I find, but these humans are just presenting themselves to us, we have to take advantage. I even called a few friends over to watch, it’s ridiculous! We had trivia, made some human-shaped jello shots, the works. Then we took a hit of human blood and went into a frenzy. It’s my favorite week of the year by far!”

Humans have recently been enthralled with Shark Week on the Discovery channel, hosting parties and creating drinking games for the event that celebrates sharks, and offers some insight into shark behaviors. That is, of course, after showing us fourteen different ways a Great White Shark can jump out of the water to bite a fake seal.

“We felt degraded, to be honest,” says Poseidon, an enormous Great White Shark. “Humans continuously mock us. Like ‘haha look he thought that fake seal was a real seal!’ Yeah, no duh! We’re starving down here, we need like hundreds of pounds of food per meal. Plus, why are they so interested to watch us get busy and have babies? We aren’t crashing through the walls of emergency rooms and breaking into bedrooms at night. Just let us do our thing. I bet hearing that we have a Human Week will send shark-fin soup orders up tenfold.”

Humans don’t normally care about sharks, but when Shark Week is on they claim sharks are their favorite thing in the whole world, similarly, most sharks also don’t care about humans until Human Week.

“What do I care if humans are dying from hunger all over the world? I’ve got stuff to do,” quips Chomp, a 19 year old Common Hammerhead. “But this week, I’m all about eating humans. I learned a little bit about them, too, like how they all kill things for fun, and want to elect people to lead them when they have no history of leading. Humans are wild. But next week, nah, I won’t do a single thing to help humans. Maybe next Human Week though!”

“We sharks have been around for millions of years,” explains Thresh, a local Sand Shark. “We’ve seen humans do lots of stupid stuff, and they will continue to do stupid things. But we sharks will just keep living our lives here, under the sea. I bet in a thousand years they will have forgotten what Shark Week was about in the first place. You’ll probably be ritualistically sacrificing people to us sharks based on a mistranslation of what Shark Week used to be. But we’ll remember, though, and we will appreciate the sacrifice. Think of Human Week as the appetizer to when that day comes.”

Human Week in Ocean City runs from September 25th through October 1st. Have fun in the waves!