(FREDERICK) “I used to dread coming to work on sunny days,” regales Jenny Derricks, one of the many office workers at Leidos Biomedical Research in Frederick, Maryland. “[Logan] was always more enthusiastic when it was sunny.”

For months, Jenny has endured the sound disruption of her cubicle neighbor, Logan Sleaves, a 24 year old coworker filled with a vigor for life.

“It was never-ending! A constant stream of humming, desk-tapping, whistling, and even full out karaoke! It was terrible! He was off-pitch, off-key, off-beat; he was taking everything about music and twisting it to the point that I hated any sound at all.”

Jenny was forced to listen to all of Logan’s audio garbage, and would be denied any attempt to move desks as she and Logan should “work it out themselves.”

“I told him it was distracting and a little annoying,” says Jenny, picking at a hangnail. “He got the hint for maybe 20 minutes and then I started to hear the Beverly Hills Cop theme mumbling from his mouth! I reminded him again and he was all like ‘I didn’t even realize I was doing it!’ and ‘I can’t help it! I guess I’m just in a singing mood!’”

Mike Shrouder, a Doctor of Music at Boston University, informed us that there is no such thing as “a singing mood,” and when a person sings it is a conscious decision. The person knows exactly what they are doing.

Logan’s insistent chirping went on unabated, until Thursday, June 16th, when Jenny was surprised to find her ear drums no longer hurt like they used to.

“All of sudden, it was like there was no noise – of course, that would be impossible, because Logan never shuts the fuck up – but then I realized it wasn’t an absence of noise, it was an absence of me hating the noise. I wasn’t exactly sure what was happening; was I just becoming accustomed to the audial onslaught from Logan’s lips? Was I developing feelings for this guy, making me hear his awful singing in a new way? It was so beyond belief that he might actually be getting BETTER that I came up with a thousand other reasons for what it might be.”

Of course, Logan HAD gotten better but not by chance. Logan’s friends and family had also been on his case about leaving some room for silence. When that didn’t take hold, they encouraged him to at least try to improve. He did – taking classes, listening to varying musicians, and keeping one of those tuning thingies in his shower.

Logan still can’t stop himself from letting out the song in his heart, but Jenny has found a silver lining.

“I’ve given him CDs of my favorite artists and recommended new songs that I like. Then he comes to work, and he becomes my own personal radio! Although, just like the radio, he will continue to repeat songs until I hate them, but at least my ears have stopped bleeding!”

At press time, Jenny is enjoying her job, but Logan has moved on, and is now the guy that puts all the ear-shattering auto-play music on websites.

Support our writers on Patreon

We at the Last Hurrah are terribly sorry to announce that tonight’s show has been cancelled due to a city-wide power outage paired with our crippling fear of the dark. We will return to the Maryland Ensemble Theatre on January 24th and are working on getting a web-exclusive episode to you all shortly.

Best regards,
–That Stone Cold Pack of Weirdos at The Last Hurrah

In my time as Tuscan’s finest fine art critic I have been outspoken about the concept of “found object” art, or “objets trouvés” as the French call it. Art is something that should be studied and carefully considered as it is created. More often than not objets trouvés feels rushed and lazy, as if someone tossed a pile of garbage into and art gallery. “Tada!”

Still, art may surprise, even objets trouvés. In 1941 Picasso created his incredible Head of a Bull out of nothing more than an old bicycle seat and handle bars. While many were surprised to find Picasso had dabbled in this format, I was equally surprised when I received word of such art from across the pond, in the small town of Frederick, Maryland.

It is my understanding that for years Frederick’s Town Hall has been host to a wretched pile of garbage. The pile has grown so heavy and cumbersome that some have accurately called it “a monument to human filth” that cannot garbagemen. That is until two anonymous local artists turned this trash pile into a piece of objets trouvés.

With paint as their chosen medium and trash as their canvas, what they created turned blight into art. The anonymous painters took the trash, formed into the shape of man who felt people of color were simply less than people and turned it into expression of frustration. A splash of red paint symbolizing the blood on the figure’s hands, while expressing the suppressed rage of a community forced to witness the local trash pile on a daily basis. Artist brilliance.

I was prepared to fly overseas and critique the piece in person until I was informed that city officials removed the art but left the trash. If the art is too provocative for the steps of town hall, why not remove the whole thing and let the community treasure it in a museum of some sort. Or at the very least, save money on Halloween decorations and leave the art be until the end of the month.

On January 31st at 8 p.m. the Maryland Ensemble Theatre (MET) will present The Last Hurrah’s “Everything You Need To Know About The Big Game”. The Last Hurrah cannot clarify which “Big Game” it’s talking about, due to the NFL’s legal crackdown, but you can probably guess. Join a panel of comedians as they check for deflated balls, blow millions on big-budget commercials and prove once and for all which team is the best. It’s the best way to enjoy the big game, prior to spending a night yelling at a television while enjoying the big game.

In the past, nearly 100% of Last Hurrahs have occurred on a Sunday, but we knew people wouldn’t show when we went up against the Big Game (you literally can’t drop SB in any form of advertisement) so we were fortunate enough to snag a Saturday night spot! If you live in Frederick, MD come join the fun live!

Previously on The Last Hurrah…

Tensions are high on The Last Hurrah this week, as Kevin Cole and panelists Andrew Michaels , Christine McQuaid and Laura Stark discover their emails have been hacked by an anonymous outside source. But if they can put their differences aside they may here a comedic pitches from the show’s new Comedy Intern and then sit down with Bud and Doug from Gutenberg: The Musical: The Revival! 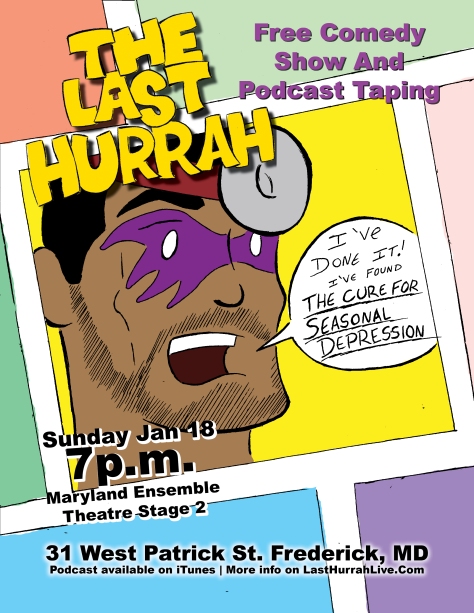 On this week’s The Last Hurrah, Giovanni Kavota takes over as host but is having a hard time getting into the spirit of the show… that is until his wild Grandpa shows up to show him the way. Leading to more cheer, Gio welcomes panelists DC Cathro, Andrew Michaels and Christine McQuaid, the three discuss comic books and Andrew’s past as uncovered in envelope time capsule. How does Andrew’s life hold up the one he once lived? Is he really that into comic books? And will we finally find out what the funniest word is? It’s all on this week’s Last Hurrah! 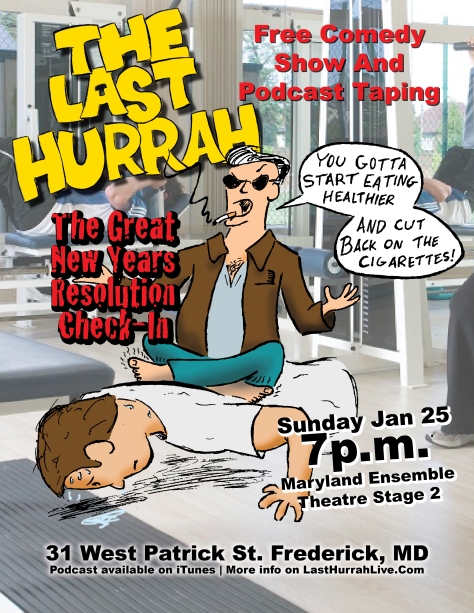 This week, Kevin returned to The Last Hurrah to find out who how everyone’s resolutions had been going. Joined by Bobby Martin, James McGarvey and Christine McQuaid they discovered that most of them had resolved to be less of a jerk to one another. They then turned their attention to Bobby who would be fleeing for Ireland in matter of days. What could a man who claimed not to have a single resolution do with his life? I guess you’ll have to listen to find out. 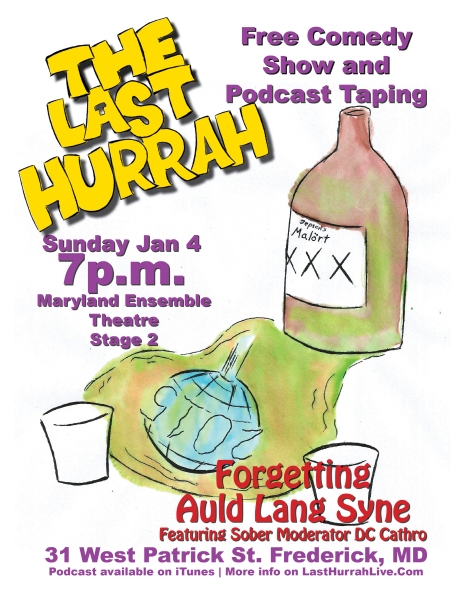 Episode 23 of The Last Hurrah is now live! Click here to listen via iTunes.

Inspired by this tweet sent out from Giovanni Kavota: “All I want to do is share a beer with an old friend, tell him why I’m sad, and talk about how we’re going to change the world.”This weekend panelists Kevin Cole, Giovanni Kavota, and Christine McQuaid drunkenly attempted to solve the world’s problems. Joined Sober Moderator DC Cathro, a lifelong non-drunkard, the three alcoholics were fed questions ranging from “In exactly 13 words, no more no less, explain what Fracking is” to “Why do hurricanes keep happening?” and were charged with answering them for the betterment of mankind, womenkind, allkind really. What better way to ring in the new year than to listen to some comics stumble through life with the same (maybe less) degree of toxicity that you showed on New Years. 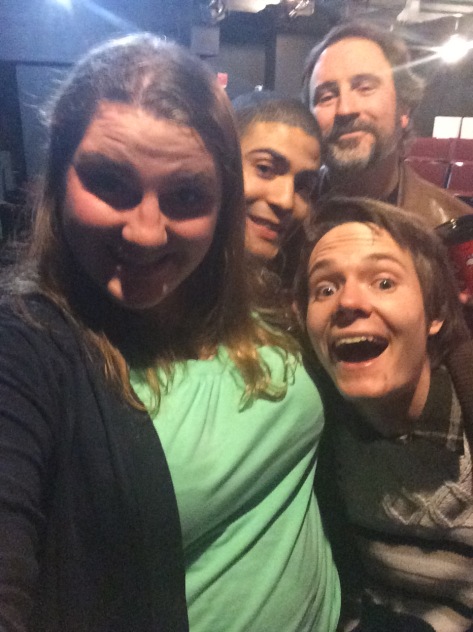 Join us for more this Sunday at 7pm at the Maryland Ensemble Theatre! (31 West Patrick St. Frederick, MD) 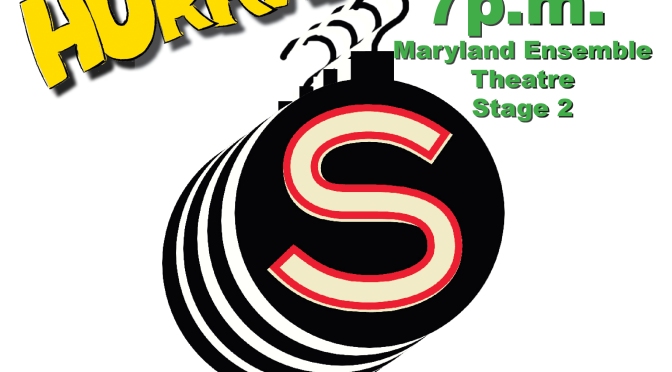 Episode 21 of The Last Hurrah is now online! You can click the picture above to listen!

The podcast no one is talking about takes on the podcast that everyone is talking about. Based on the podcast Serial, from Sarah Koenig and This American Life, The Last Hurrah will put a live, comedic, Christmas spin on the true crime show. Join reporter Sarah Koenig (portrayed by Lisa Burl) as she investigates Adnan Syed’s (Giovanni Kavota) claim that a big man in red named Kris Kringle can prove his innocence. It’s the story of one journalist’s quest to find solid evidence that Santa Claus exists and whether convicted criminal Adnan Syed is on the naughty or nice list.

The Very Serial Christmas Special is in no way affiliated with NPR, This American Life or the parties involved and is a protected work of parody.

Episode 18 of The Last Hurrah is now online! You can click the picture above to listen!

This weekend the spirit of Thanksgiving paid a visit to The Last Hurrah and the holiday will never be the same. Kevin opened the show by reinventing the way we consume Thanksgiving dinner, Matt Kline, James McGarvey, and Christine McQuaid regaled us with tale from the drunken night before Thanksgiving. Lia Seltzer swung on by to share her experience celebrating Thanksgiving at a Ski Resort before Nicky Castanzo took the stage. And it all capped off with a visit from Mumps The Dying Turkey.

Recently on The Last Hurrah we interviewed the creative team behind Landless Theatre’s Prog Metal Sweeney Todd. In this clip Melissa and Andrew Baughman discuss the balls it took to get in touch with Stephen Sondheim.

You can listen to the full episode here!

Episode 17 of The Last Hurrah is now online! You can click the picture above to listen!

This weekend came to a close with a Commercially Early Christmas Special that was cut short when Giovanni Kavota and his band pro-thanksgivers (Callan Holderbaum and Scott Travers) payed a visit to the show to reclaim the holiday. The group sat down and hatched a scheme to resurrect Thanksgiving, making it a brand holiday that will no longer be skipped in favor of Christmas. One way to celebrate Thanksgiving, a new holiday sketch show called “Crab Over Turkey” and Gio, Cal, and Isabel Duarte gave us an improvised taste of the show. 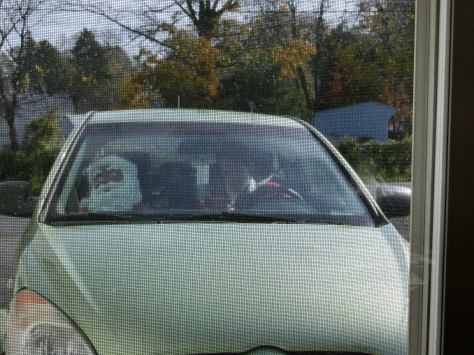 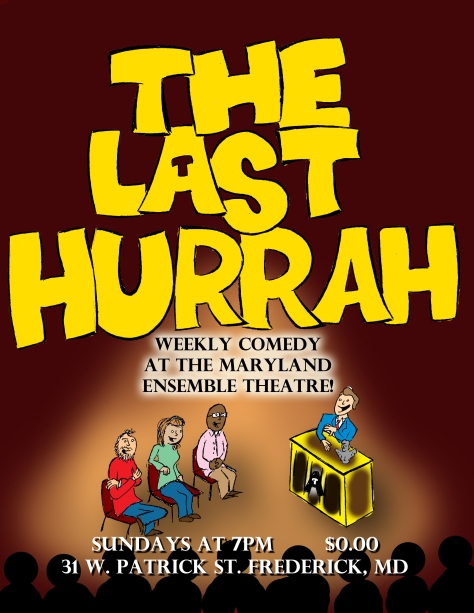 This Sunday at the Maryland Ensemble Theatre, The Last Hurrah kicks off their first performance. Join as Kevin Cole as he attempts to lay out the premise and feel for this conversational comedy show. This week’s panelists include Annual writers Andrew Michaels and Scott Travers, as well as long time Comedy Pig Laura Stark. Karli Cole will return with an update to last week’s Yik Yak so that we can help Robert Martin quit his job. Plus, a special performance from The Comedy Pigs!

And download past episodes of The Last Hurrah on iTunes!