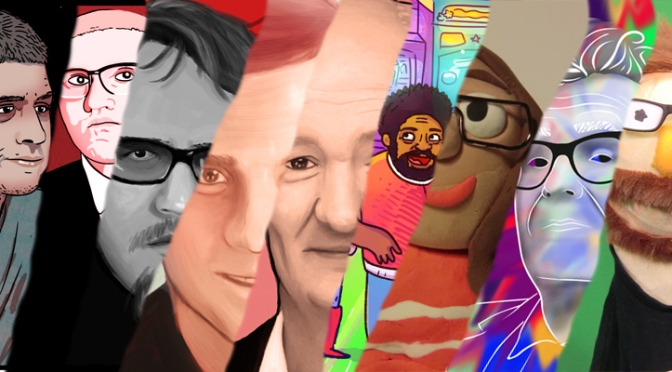 Believe it or not, those interviewed by The Annual continue to live their lives and produce new content after being interviewed. Here’s a chance to catch up on some of their current projects/whereabouts.

Tom is set to headline the Lucille Ball Comedy Festival on August 8th in Jamestown, NY. In the next month you’ll be able to see him live in Connecticut, Florida and New Jersey. Click here for his current tour schedule.

Gaby now blogs for What’s Trending Live while making occasional appearances on the show. She has also launched a new webseries with her best friend entitled Just Between Us, you can hear her Five Minute Not-Cast on Soundcloud and you can read one of her latest pieces in The Jewish Daughter Diaries which will be released on May 6th.

Ron plays Shelly on NBC’s Undateable premiering May 29th at 9pm, you can watch the trailer above. In the coming weeks you can find him in Portland, Denver, and San Diego. Click here for his current tour schedule.

Whose Line back on TV, Colin and Brad Sherwood continue to tour together, but did you know that Colin recently released book combining classic literature with improv, it’s called Not Quite The Classics.

Greg has digitally released a new hour long special Greg Proops Live a Musso and Frank for $4.99 at gregproops.com. He also continues to tour and release The Smartest Man in the World Proopcast. You can see him live at The Bellhouse in Brooklyn, NY this weekend and across Europe throughout the rest of May.

Hitting it’s one year anniversary a little over a month ago, Nick’s podcast Stand Up Close and Personal has been chronicling the lives of three open mic comics.

Rick and Morty has been picked up for a second season and while the return does not yet have a premiere date, you can catch reruns on Adult Swim and hear Justin voicing Lemongrab and various other characters on Adventure Time

While appearing regularly on Austrailian television, John Safran’s recent projects include a true crime novel entitled Murder In Mississippi chronicling the murder of a white supremacist that John spent an uneasy couple of days with while filming his Race Relations special.

I went in to my interview with Gaby Dunn nervous. I hadn’t seriously interviewed anyone—much less someone I fangirled over—in over a year. I went in to my interview planning to talk to Gaby Dunn about Feminism and Double Standards and Issues (all of which I am very passionate about, as is Dunn), but somehow we ended up talking about making dreams realities and following the writers of Fox’s “Sleepy Hollow” on Twitter. I’m not worried, though. Dunn ended our interview with “Talk to you soon!” and although I’m not planning to head out west in the near future, it’s nice to know your humanspirations are only an email away, and if you need to ask a burning question about women in comedy, well, you can. Maybe not now, but sometime.

All’s this to say is that I’ve followed Dunn’s work for a few years now. A journalism major in college, she founded and conducted “100 Interviews,” a series of—you guessed it— 100 interviews with “a porn actor,” “a horror make-up artist,” “someone who left someone else at the altar,” and more. She interned at the Daily Show, has written for basically everyone on the World Wide Web, and studied improv at People’s Improv Theater and sketch at Upright Citizen’s Brigade. Now, Dunn’s living in Los Angeles, pursuing comedy, filming a pilot, and writing for The Daily Dot. She also has a super cute dog.

Gaby Dunn: What are you trying to write about?

EP: Because I don’t think it’s addressed as much as it needs to be with what’s been going on, and with the diversity issues that have been brought up lately on “SNL,” it’s kind of like, I’d like to talk to someone about this. Things have gotten better, but there’s still a long way to go.

So I just had some basic questions for you, just about your interest in comedy—and I know you’re also a journalist, and that’s something I admire. I mean, I love your “100 Interviews” thing—

EP: —I was a big fan of that. When did you first realize you were interested in comedy?

GD: In middle school, I started. I had a TV in my room, and I started watching “Comedy Central Presents” on Friday nights. My family were sort-of-religious-Jewish, so I wasn’t really allowed to go out on Friday nights because it’s Shabbat.  But you’re not even supposed to watch TV, but I was allowed to do that. I went to a religious school, too, so me and this other girl who was also home alone on Fridays would be on the phone with each other watching “Comedy Central Presents.” We just loved all the comics, and we would quote them to each other, we would tell jokes and stuff.

GD: In middle school, I was super into Mike Birbiglia, Maria Bamford, and Mitch Hedberg. Demetri Martin was a big one. Those might have been the big ones that I knew. Actually, four years ago, I was 21, I saw Mike Birbiglia in a bar, and I was really excited. I was like, “Oh, my gosh! I’ve loved you since I was a little girl!” and he was like, “Uhhh … I hope someone never says that to me again!” [Laughs.]

EP: What college did you go to?

GD: Emerson, in Boston. Everyone in entertainment went to Emerson. [Laughs] Literally, out here so far, either Emerson or Judaism have opened doors.

EP: Nice! The Judaism aspect—I plan to play that up as I continue to network. [Laughs]

GD: It’s insane how much it works. It’s like a terrible stereotype, but it’s caused so much.

EP: Who would you say your greatest comedic influences are? You love sketch obviously, but early influences were stand-up, and now you’re doing stand-up.

END_OF_DOCUMENT_TOKEN_TO_BE_REPLACED 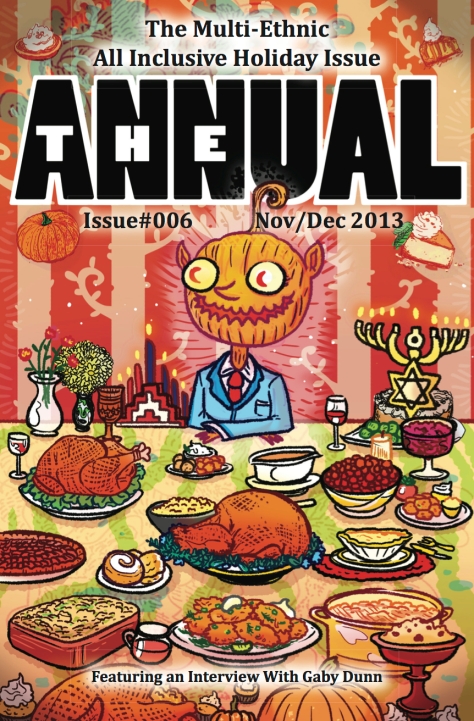 Arriving on November 6th is The Annual’s very first ever Multi-Ethnic All Inclusive Holiday Extravaganza! An issue pumpkin spiced and filled with more festive goodies than you can shake a leg at. On top of that, this issue is scientifically guaranteed to include every holiday from Halloween to New Years! Witness the world’s first Kwaymation Kwanzaa, hear about the celebration of Hannahkuh, and examine the more obscure December holidays. All this and more in our Multi-Ethnic All Inclusive Holiday Extravaganza! This issue also features an interview with Stand-up comedian/writer/journalist Gaby Dunn!

Be sure to preorder your copy today and receive free shipping!